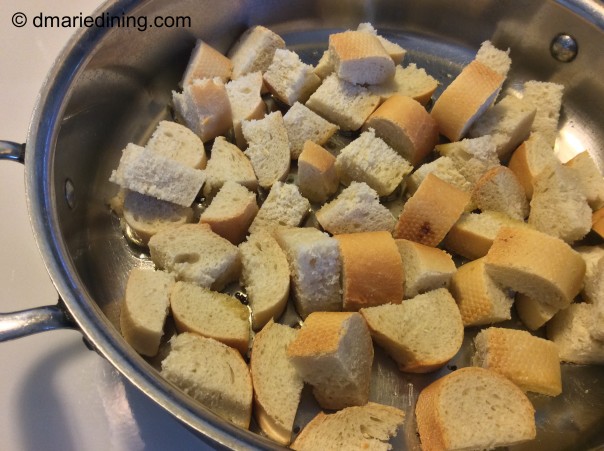 Salads in general don’t take long to pull together and Panzanella Salad fits that bill. The most time consuming part of making this salad is crisping up the bread cubes. Of course, if you are really short on time you could use prepared toasted bread cubes or even croutons. In a pinch use whatever is quick. I like crisping up my own bread cubes because I like to use different types of bread when making this salad. Ciabatta, sour dough bread or even a french baguette are a few of my favorites. One day I want to try and use cornbread but I am afraid it may come out mushy. I will let you know once I figure it out.

I took a few liberties with my version of Panzanella Salad by adding vegetables not included in the traditional versions (there are many versions of the traditional salad in the universe). The straight forward version does not use peppers or meat. I wanted the salad to be colorful since we often eat with our eyes. My family and I are meat eaters. Plain and simple. We love veggies and can go a few days without eating meat but we always go back to eating fish, fowl, pork and sometimes beef. I offer no apologies to my vegetarian friends. Adding meat is optional.

Like I always say …. make this recipe your own. I did! 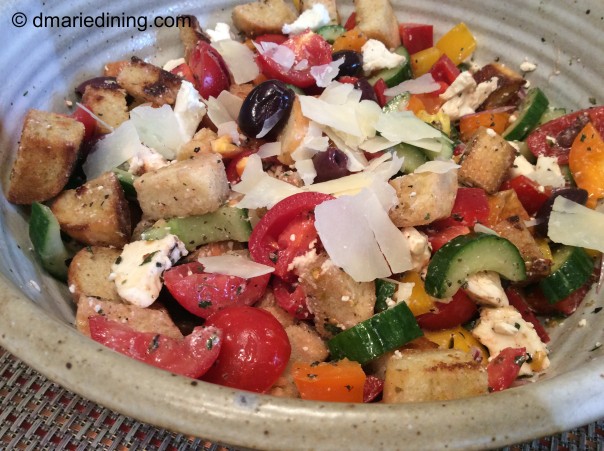 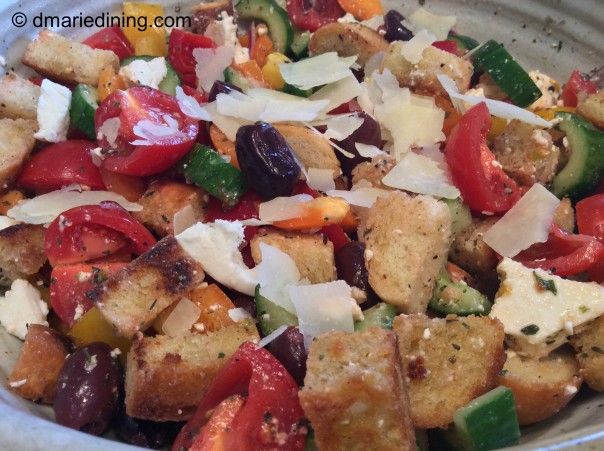 1 pint cherry tomatoes cut in half

Place ingredients into a small jar and shake to blend. Set aside.

Heat olive oil in a large skillet over medium heat. Add bread cubes and allow to crisp up but not toast. Shake and toss the bread cubes to make sure they do not burn. Let cool and set aside.

Cut cucumber in half and scoop out the center then cut the cucumber into chunks. Place vegetables in a large bowl. Add prosciutto, feta, mozzarella cheese pieces and bread cubes. Shake dressing then pour over salad and gently toss to combine all the ingredients. Set salad aside for at least 1 hour and up to 4 hours so that the flavors blend together. Sprinkle with shaved parmesan cheese for garnish. 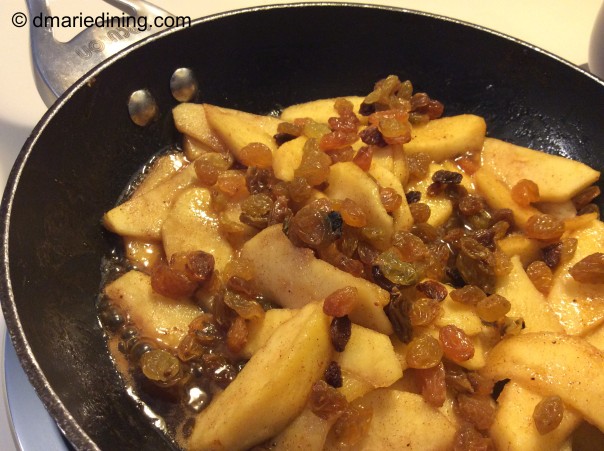 The bread puddings I have tried over the years (yes, I kept trying to find one that I liked) have all reminded me of wet bread. I know bread pudding is moist but it should not be wet and soppy. It usually reminded me of dunking donuts into coffee. I tried that too and did not like it. Fast forward many years later and my taste buds have changed. I am not totally in love with bread pudding but I must say it has grown on me.

My first experience with a scrumptious bread pudding was at a local restaurant. I ordered it because I saw a beautiful plate of the dessert at the table next to us. The description on the menu made the bread pudding sound so good I thought I should give it another try. The dessert lived up to the description and looked absolutely wonderful. Now I am willing to eat and make bread pudding whenever the mood hits me. 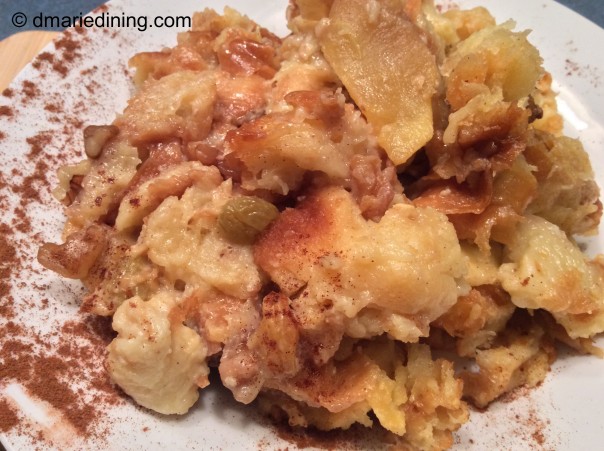 In a medium non-stick frying pan add 2 tbsp butter and melt over medium. Add apple slices, water, raisins and light brown sugar. Toss to coat apples with brown sugar then simmer until apples soften. Remove from heat and set aside.

Whisk eggs and egg yolks with sugar until smooth. Whisk in seasonings then add milk, cream and vanilla.

Place croissant pieces in a long buttered baking dish. Pour melted butter over bread then layer with cooked apples. Toss walnuts into the bread mixture. Pour custard mix over croissants. Press bread into the custard and make sure all pieces are covered with the custard (add a little more milk if necessary). Cover with plastic wrap and place in refrigerator for 2 – 3 hours or overnight.

A good sandwich always starts with delicious bread. Some of the best bread comes from the bakery at your local grocer. I often find myself searching for different types of rolls for sandwiches when I want to make a tasty but quick family meal.

The other day I found two different flat rolls that inspired me to try a new sandwich. An Italian roll and a jalapeno roll. The Italian roll was sprinkled with Parmesan cheese and oregano while the jalapeno roll was sprinkled with a little grated Parmesan cheese with slices of jalapeno peppers baked into the top of the bread. Both rolls smelled heavenly at the bakery and were so inviting that I had no choice but to put a couple of each in my basket. The Italian roll inspired me to create a Hot Italian Sandwich which turned out to me a winner in the family. I have made this sandwich a few times since my first try and it continues to be something the family enjoys. The sandwich is packed with soppressata, capicola ham and pepperoni sliced from the deli. 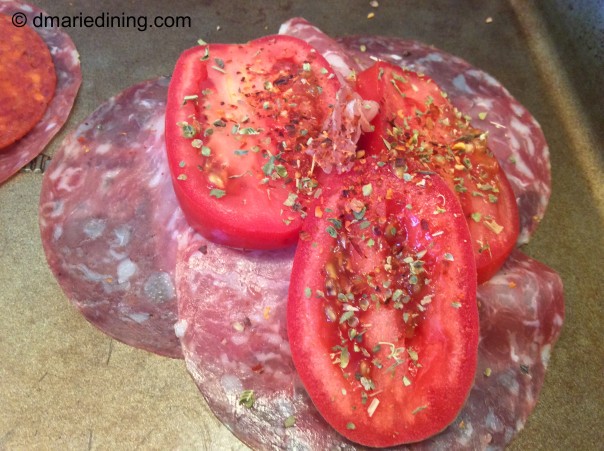 Sandwiches are my go to meal whenever we are having a later than usual dinner because my son has a sporting event, school event or I have a bunch of errands after work. By the time we get home I don’t feel like preparing a complicated meal but I still want a balanced dinner. I really just want to get dinner on the table in less than 30 minutes so that we all still have time to relax before going to bed to prepare for another busy day. 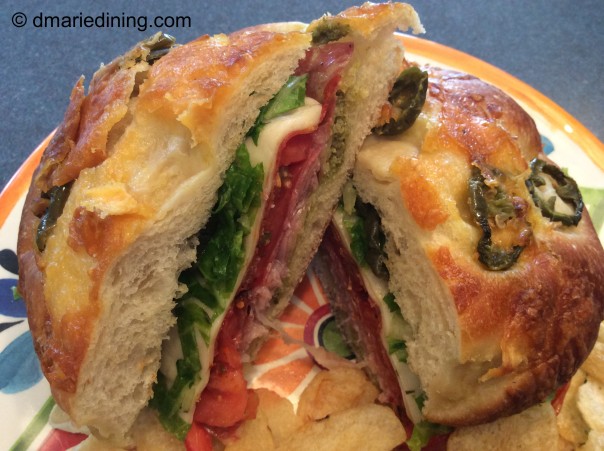 Mix Italian dressing with lettuce and set aside.

Place meats and bread in the oven until cheese melts approximately 2 – 3 minutes. Remove from oven and top bottom half of each roll with meat and lettuce. Place other half of roll on top of the lettuce and cut in half. Serve with chips or a cup of soup.

Tonight I made Naan Style Pizzas. I found small individual sized Naan at Trader Joes’s. I was looking for small regular flatbread but spotted the Naan flatbread instead. I wanted to make something quick for dinner and thought homestyle pizzas would be a good choice for a quick meal. Hubby and my youngest son are pizza lovers so they usually like any kind of pizza you throw in front of them. I on the other hand prefer non traditional style pizzas. 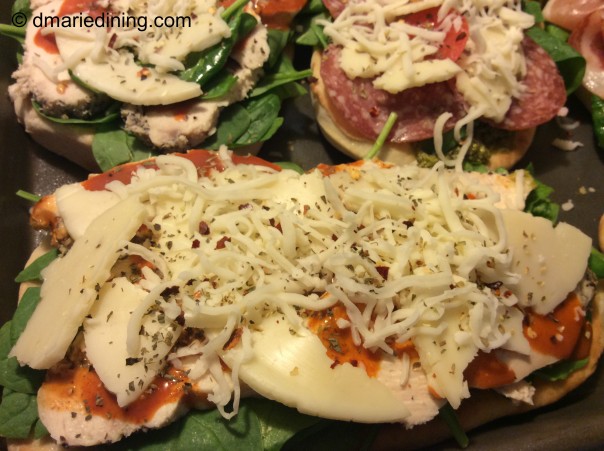 Passing by the deli meats and cheeses I had a light bulb moment and decided to make a variety of pizza toppings like pre-cooked chicken, prosciutto, salami and capicola instead of pepperoni or sausage. Since the pizzas were individual sized we were each able to try a different type of topping. To make the pizzas even more non-traditional I slathered the Naan with pesto instead of a basic pizza sauce. This gave the pizzas more of a savory taste rather than the acidic flavor you get with tomato sauce. 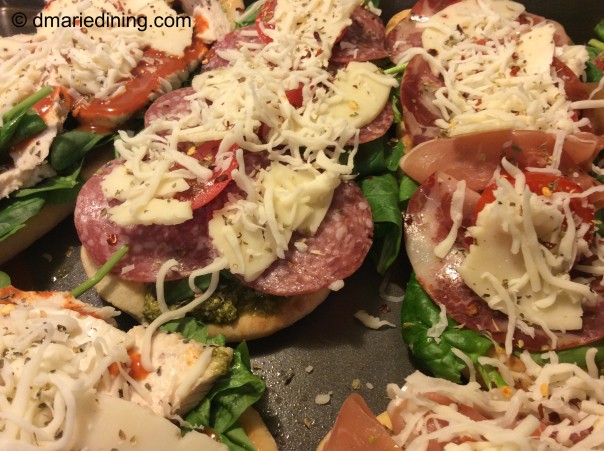 The best thing about pulling together the Naan Style Pizzas is that it took all of 15 minutes. That is my kind of recipe. Baking took about another 15 minutes to melt the cheese and make it golden brown. Total time for me to get dinner on the table was about 45 minutes which included me explaining to my hubby what I was making.

After a few bites and a couple of umm hmmm’s I knew the Naan Style Pizzas were blog worthy. So there you have it. Another quick and easy meal with a healthy twist. Try it and I am sure you and others will like it.

Pull cheese apart and set aside. Place pre-cooked chicken in a bowl and drizzle buffalo chicken wing sauce over chicken. Toss until chicken is well coated with sauce. Set aside.

Spread about 1 tbsp of pesto on each slice of Naan flatbread then layer with baby spinach leaves. Next on 1 -2 pieces of flatbread layer the chicken then a few slices of tomato and sprinkle with oregano. Top with cheese.

Follow the same steps creating the salami flatbread pizza. Alternate the prosciutto and capicola together on one flatbread when layering.

Place Naan Style Pizzas on a rimmed baking sheet. Bake for 15 minutes until cheese melts and is golden brown.