Homemade pizzas don’t have to be boring. By boring, I mean using only the basics like pizza sauce, cheese and pepperoni. I have nothing against a basic pizza. But, when I make pizzas at home I like to pair different veggies or add chicken or prosciutto instead of pepperoni. I also substitute pesto for the pizza sauce. 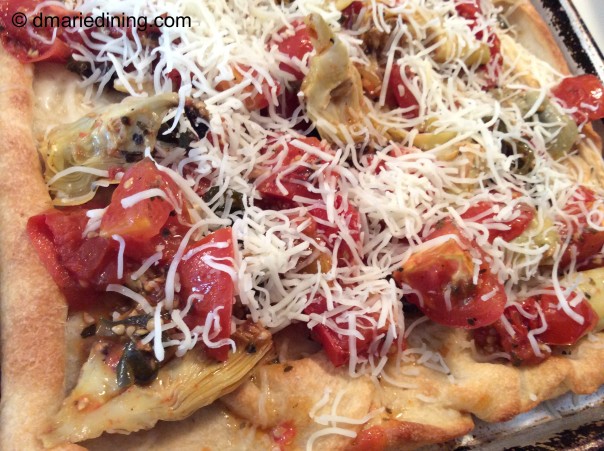 One of my favorite homemade pizzas is Roasted Tomatoes and Artichokes Pizza. Roasting the tomatoes brings out the natural sweetness of the fruit. Yes, tomatoes are classified as a fruit not a vegetable. Of course, there is an ongoing debate about that but it really doesn’t matter. All I know is that freshly roasted tomatoes are delicious. Combining the artichokes with the roasted tomatoes just increases the deliciousness of the pizza. I have tried different types of tomatoes in this recipe and depending on the tomato the flavor is slightly different.

Ultimately, I prefer using Caperelli tomatoes but I also enjoy Roma tomatoes on this pizza. Hot house or beefsteak tomatoes don’t fair well with this recipe but in a pinch use whatever you have available.

Like all pizzas this one is versatile. Add roasted chicken for protein or even pepperoni if you feel a pizza isn’t really a pizza without it. For my vegetarian friends, I think you will want to add my Roasted Tomatoes and Artichoke pizza to your list of homemade pizza ideas. 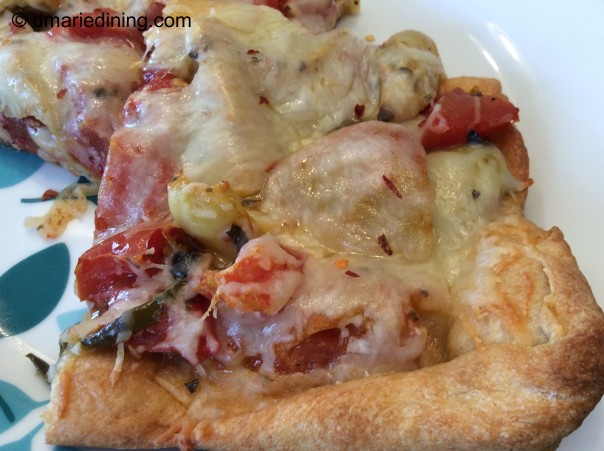 Spray rimmed baking sheet with cooking spray. Place tomatoes, artichokes and red onions on the baking sheet. Sprinkle with olive oil, salt, black pepper and onion powder. Gently toss to coat veggies with olive oil and seasonings. Bake for 20 – 25 minutes until veggies are roasted. Remove from the oven and let cool for 3 – 5 minutes.

Remove from the oven and let cool for 1 minute then slice.

Tonight I made Naan Style Pizzas. I found small individual sized Naan at Trader Joes’s. I was looking for small regular flatbread but spotted the Naan flatbread instead. I wanted to make something quick for dinner and thought homestyle pizzas would be a good choice for a quick meal. Hubby and my youngest son are pizza lovers so they usually like any kind of pizza you throw in front of them. I on the other hand prefer non traditional style pizzas.

Passing by the deli meats and cheeses I had a light bulb moment and decided to make a variety of pizza toppings like pre-cooked chicken, prosciutto, salami and capicola instead of pepperoni or sausage. Since the pizzas were individual sized we were each able to try a different type of topping. To make the pizzas even more non-traditional I slathered the Naan with pesto instead of a basic pizza sauce. This gave the pizzas more of a savory taste rather than the acidic flavor you get with tomato sauce.

The best thing about pulling together the Naan Style Pizzas is that it took all of 15 minutes. That is my kind of recipe. Baking took about another 15 minutes to melt the cheese and make it golden brown. Total time for me to get dinner on the table was about 45 minutes which included me explaining to my hubby what I was making.

After a few bites and a couple of umm hmmm’s I knew the Naan Style Pizzas were blog worthy. So there you have it. Another quick and easy meal with a healthy twist. Try it and I am sure you and others will like it. 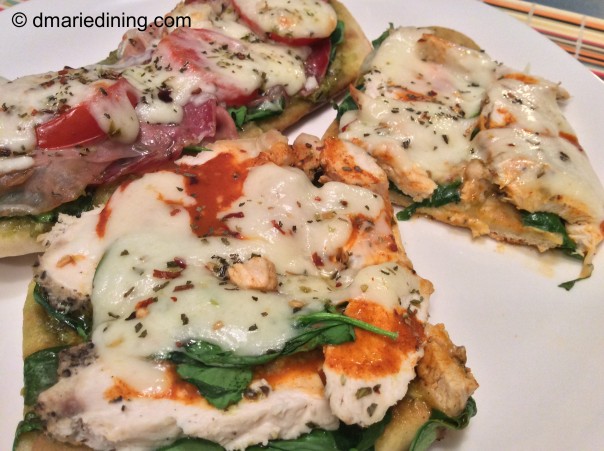 Pull cheese apart and set aside. Place pre-cooked chicken in a bowl and drizzle buffalo chicken wing sauce over chicken. Toss until chicken is well coated with sauce. Set aside.

Spread about 1 tbsp of pesto on each slice of Naan flatbread then layer with baby spinach leaves. Next on 1 -2 pieces of flatbread layer the chicken then a few slices of tomato and sprinkle with oregano. Top with cheese.

Follow the same steps creating the salami flatbread pizza. Alternate the prosciutto and capicola together on one flatbread when layering.

Place Naan Style Pizzas on a rimmed baking sheet. Bake for 15 minutes until cheese melts and is golden brown.

The other day I was watching one of my favorite cooking shows that featured cinnamon buns. I like cinnamon buns but sometimes they are a bit too sweet for me. I am not a big sweet eater even though I love chocolate but it has to be dark chocolate which is more bitter than sweet. Anyway, I though it would be nice to come up with a bun recipe that was more savory than sweet like a pizza bun. The idea was to use the same method of building a cinnamon bun but with different ingredients. 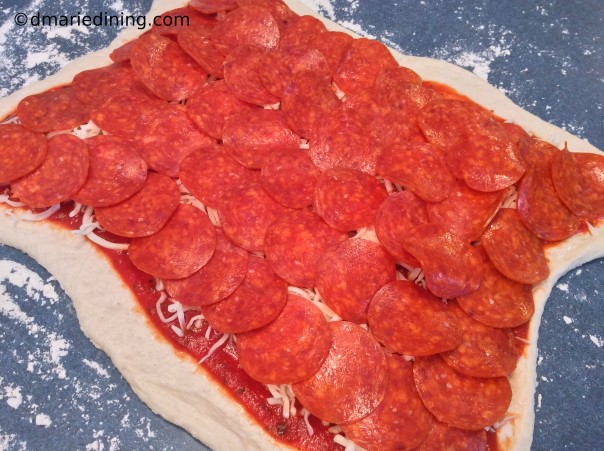 Of course when you think of pizza you think of pizza dough, sauce and cheese. Simple ingredients for a simple dish. I have to say that when I first pulled the Bizza (more on the name later) out of the oven it was not the prettiest of sights. Everything looked kind of mushed together but as I pulled each of the buns apart they started to look pretty good. The final test for whether or not I could post the recipe for a Bizza on dmariedining.com was in the taste. My hubby looked hesitant to try it and my youngest son just looked hungry. After my son took a bite he nodded his head (like a cool teenager would) and my hubby said it reminded him of a calzone which he loves. Score one for dmariedining.com!

Now, you might still be wondering where the name Bizza came from. It was my hubby’s idea. Since I told him the recipe was a take on a cinnamon bun in the style of a pizza he came up with the name Bizza to represent a bun and a pizza. That is how the Bizza was born.  The Bizza has become one of my” go to” quick lunches for the family on the weekends.  Try it.  I bet you’ll become a fan of the Bizza.

Spray cake pan with cooking spray. Spoon a layer of pizza sauce in the bottom of the pan. Sprinkle a little mozzarella cheese over the sauce. Set aside.

Sprinkle flour on a clean flat surface. Place pizza dough on flour and using a floured rolling pin roll out the dough slightly. Spread pizza sauce evenly over the pizza dough leaving a ¼ inch boarder around the edges. Sprinkle mozzarella cheese over the sauce. Layer pepperoni over the cheese then sprinkle the fontina cheese over the pepperoni. Start at one end of the pizza dough and begin gently rolling it forward and try to keep it tight to create a log. If the dough is too sticky to handle, pat your hands with flour.

Cut the log into 4 – 5 pieces. Place each bun in the baking pan end side up. Bake for 10 – 15 minutes until the pizza dough is cooked and browned. Remove from the oven and let the Bizza rest for 5 minutes. Place a plate over the baking pan and then flip the buns onto the plate. You may need to run a butter knife around the edge of the baking pan to loosen the buns before flipping onto the plate. Sprinkle with mozzarella cheese while the Bizza is still warm. Gently pull buns apart and serve.