While my hubby and kids love all types of pasta I am a fan of potatoes. I love mashed potatoes, baked potatoes and of course fried potatoes. Since I am the only one that craves potatoes I don’t make them too often. But, when I do I want to make sure everyone will eat them.

I figured out a while ago that in order to get my hubby to eat potatoes I needed to make them for breakfast. Why breakfast instead of dinner I still have not figured that one out yet. Hey, I don’t mind as long as I can eat potatoes.

I first flirted with making a turkey hash but put that recipe aside because I did not have turkey at the time I decided to create a breakfast potato recipe. I did however have a package of diced ham I was going to use in a ham salad recipe. Preparing Ham Hash was a nice choice mostly because I had all the ingredients on hand. A lot of recipes are created based on what is in the pantry or refrigerator when chefs put on their creativity caps. At least, that is how quite a few of my recipes are pulled together. Using a little bit of this and that based on what you have to work with is a great way to create new tasty meals. I am never afraid to try something new and fortunately my family does not mind participating as my taste testers in my crazy kitchen laboratory.

Creating a Ham Hash recipe was not a big stretch. This is a very simple recipe that is full of flavor. One of the best things about the recipe is that it is quick to fix. The potatoes and veggies do not take long to cook especially since I used packaged shredded potatoes (I do shred my own Yukon Gold potatoes when I have time).  Plus, the ham was already cooked.  So…. Viola! Quick and Easy. 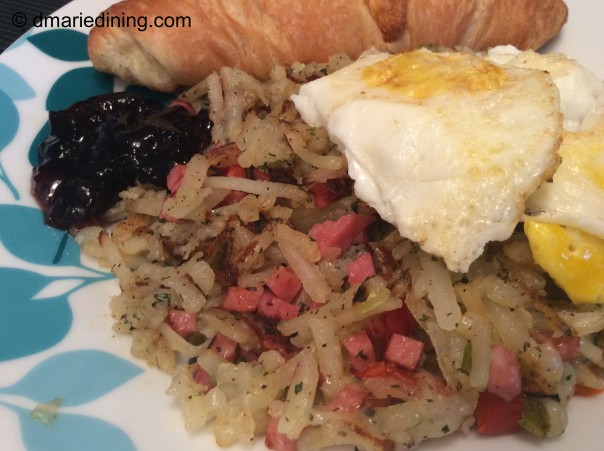 2 scallions sliced (both white and green parts of scallion)

Heat bacon fat in a large skillet over medium heat. Add diced ham and stir to coat with fat. Cook until ham is slightly browned. Remove from skillet and set aside. Add potatoes and veggies to the skillet and sprinkle with seasonings. Stir to mix veggies with potatoes. Increase heat to medium high and allow potatoes to crisp up a little for 5 – 6 minutes then add ham back to the skillet. Reduce heat to medium. Stir to mix in ham with the potatoes. Cook an additional 8 – 10 minutes stirring occasionally until the potatoes are cooked through. Serve with eggs and biscuits.

Okay, let’s all admit it. Brussel sprouts can be a little stinky when you cook them. Not everyone can enjoy the strong taste of brussel sprouts but if you are adventurous I say give it a try. Brussel sprouts have great qualities one of which is they are healthy. Brussel sprouts are packed with vitamins C and K. While reading up on the benefits of eating brussel sprouts I found out that they help support the body’s detox system, our antioxidant system and our inflammatory/ anti-inflammatory system. Not many veggies are able to bring such benefits all at once.

I came up with my brussel sprout hash recipe the same way I come up with quite a few of my creations. I needed to do something with the fresh brussel sprouts I threw into my shopping cart earlier in the week hoping I would be inspired by their presence in my frig. This time I actually was inspired by the brussel sprouts. I couldn’t bear to just boil them or simply roast them. But, I did want to bake them along with onions, peppers and potatoes and turn them into a hash. This recipe was created with just me in mind because neither my hubby nor my youngest son likes brussel sprouts. Me? I love them. I just don’t prepare them often because like I said in the beginning they can be a little stinky.

On the day I made the brussel sprout hash my hubby came home and asked if I smelled something funny in the house. It wasn’t a strong smell but he could smell something different in the air. Of course I couldn’t say no and had to admit I had cooked brussel sprouts. After wrinkling up his nose he pulled out the the air freshener and sprayed the whole house. Totally unnecessary but what can I say. Brussel sprouts have their own unique aroma but they sure do taste good.