Not too long ago I was watching an episode of the Sandwich King on the Food Network channel and he gave me an idea for a recipe. Granted, his version of a steak crostini was much more high end than mine but I would put my Crostini Delights up against his any day. No Jeff Mauro, that is not a challenge.

My family is not big on eating beef so making a light dish with a little beef was right up my alley. Crostini Delights can easily be adapted to whatever you like on slices of french bread. Before I made my Crostini Delights for my hubby he only raved about having bruschetta which I layered on thin slices of french bread. Now, he raves about the “Delights”.

On the Sandwich King, the host flashed fried thin slices of filet mignon and built layers of meat, pesto, rosemary, gorgonzola cheese and sliced cherry tomatoes. Like I said, his version is high end. My version uses deli slices of London broil instead of filet mignon which still has great flavor and is very tender. To make the crostinis my own I paired different ingredients to create a melt in your mouth treat. Put this recipe on the list for your next dinner party as an appetizer and I am sure your guests will be raving about the great taste of the Crostini Delights. 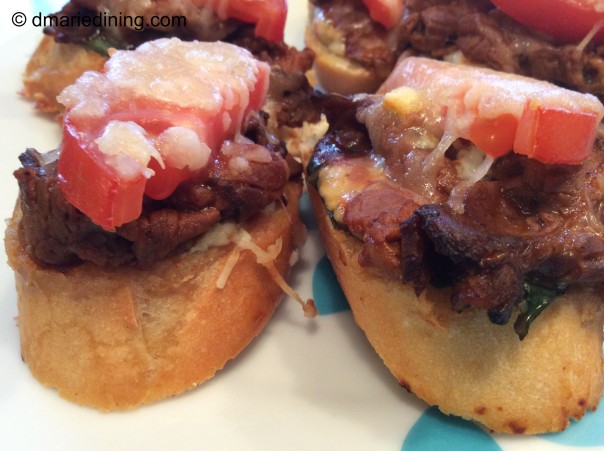 2 Roma tomatoes sliced then cut in half

Slice entire french bread loaf at an angle to create bite sized pieces of sliced. Drizzle olive oil over each slice of bread. Place on a cookie sheet and bake for 5-8 minutes until bread is lightly browned. Remove from oven.

While bread is baking, heat 1 tbsp of olive oil in a medium frying pan over medium heat. Pour BBQ sauce around the bottom of the pan then add the slices of London broil. Quickly toss the meat in the warm pan until well coated with sauce. Turn off heat.

Once the bread is lightly browned layer each slice with gorgonzola cheese, London broil, a basil leaf, two pieces of tomato then top with a little provolone cheese. Place back in the oven for a few minutes until the provolone cheese melts. Serve immediately.