I love it when a new idea comes together on the first try and is a hit with the family. I just decided to make a cauliflower soup today because I had a head of cauliflower and I needed to make something with it before it was no longer edible. A nice soup came to mind because although we have been having nice warm weather during the day it is a little chilly at night. Besides, I can eat soup any day of the year because I just love soup! 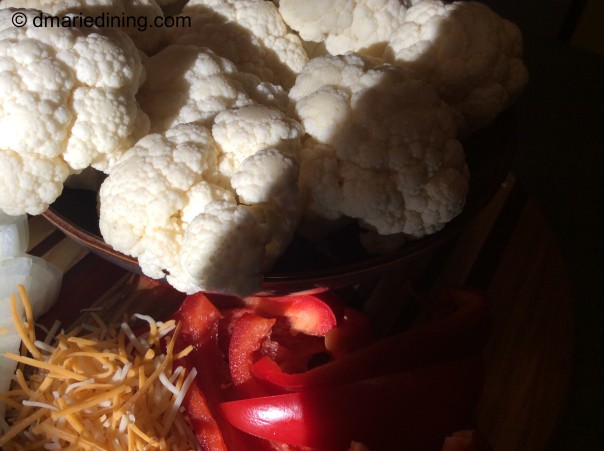 I am calling this one Orange Cauliflower Soup because I used diced red peppers in the soup which made it turn a pale orange color. I was not sure how everyone else would react to the color but I liked it so….. Orange Cauliflower Soup was born. Just making cauliflower soup was not enough. I wanted to add a slight richness to the soup and decided what better way to make it taste rich without a ton of calories than to add a little cheese. I think I have had cheesy cauliflower soup in the past but it was a little too rich for my blood. Adding just a little cheese keeps the calories down, adds thickness to the soup and definitely adds another level of flavor.

Whenever I put together a post I have to set up the food and take pictures of each step of the process. The last step of course is taking a picture of the finished product. After taking a picture of my new creation I figured I would clean up the kitchen so that I could enjoy a bowl of soup without thinking about the slight mess I had made. Well, my youngest son descended upon the kitchen with his girlfriend and immediately wanted to know if I had taken my last picture of the soup. I didn’t think he wanted to eat it (silly me) but he asked if he could taste it. Of course I said sure since I always need a taste tester for my recipes. The first words out of his mouth were “This is what I am going to miss!” That put a smile on my face because he is headed to college in a few months and I know he is going to miss my home cooking. My smile got even bigger when his girlfriend asked if she could try it and again I said sure. She said it was delicious and being the mom that I am I told her to take some home. Seems the soup fairy was on my side today and gave me a hit recipe on the first try. Thanks soup fairy!

Heat olive oil in a large pot over medium high heat. Add diced onions and red peppers. Saute until slightly browned. Add seasonings and stir. Add cauliflower and stir to mix with onions and peppers. Cook for 2 – 3 minutes. Add chicken broth and water. Stir then bring to a boil. Reduce heat to medium and cover. Let simmer until cauliflower is soft. Using an immersion blender, blend cauliflower until smooth but leave a few florets to create texture. Turn heat down to low.

In a small pan melt butter and add flour. Whisk until flour and butter are blended and form a paste. Add milk and whisk until sauce is thickened. Season with a little season salt and black pepper. Add white sauce to cauliflower and whisk to blend. Stir in cheese. Continue stirring until cheese is well blended into the soup. Taste to see if a little more salt or black pepper is needed.