My friend Doll and I were discussing food the other day (as we usually do) and she told me about a great potato recipe she saw on the show “The Chew”. Since I am a potato lover my ears perked up when Doll said the recipe started with Yukon Gold Potatoes. 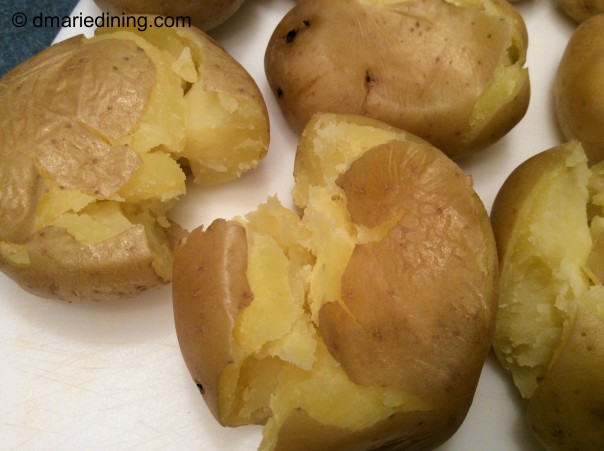 The recipe turned out to be simple so it was right up my alley. The most intriguing part of the recipe called for squishing the potatoes after boiling them until they were fork tender. Potatoes? Squishing? Sold! I knew this was recipe I wanted to make into my own. With just a few additions to the recipe Doll conveyed to me I created Potato Squishes.

As I said earlier, this is a very simple recipe that will go great with any beef, pork fish or fowl entree. My first adventure into making Potato Squishes was to pair them with steak. Like my daughter often says “shut the front door”! What goes better with steak than potatoes? Nothing! My family was a bunch of happy campers when I served up a nice tender steak, salad and the newly created Potato Squishes.

Doll – you are my new foodie hero. Thank you the idea and for sharing such wonderful recipes.

Place potatoes in a large pot with water and salt. Boil potatoes until they are fork tender but do not over cook. Remove potatoes from the pot and place on a flat surface. Gently squish the potatoes with the palm of your hand until they are slightly flattened.

Heat olive oil in a medium size non-stick frying pan over medium high heat. Place potatoes in the frying pan and brown on one side. Flip the potatoes over and sprinkle with cheese. Lower heat to medium and cover until cheese melts. Place a dollop of cream cheese on top of the melted cheese then sprinkle with chives.