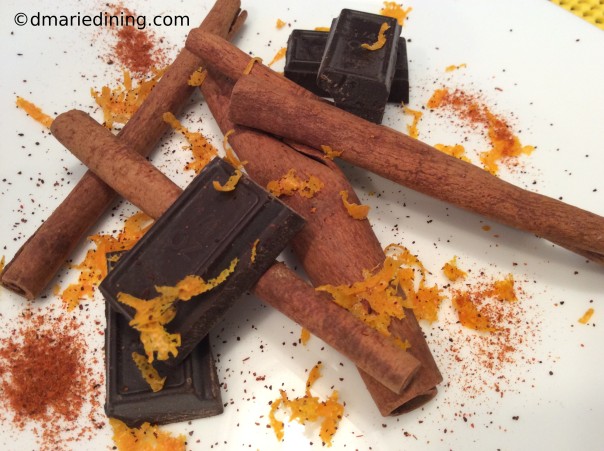 The secret to making Mexican Hot Chocolate is to have a balance between the sweetness of the sugar and the heat of the chili and cayenne. Mexican hot chocolate should initially taste sweet on the tongue and then create a tingle at the back of your throat from the heat of the chili. After a few seconds the tingle goes away and you want to sip some more. If you add too much cayenne, the tingle will be will be an out and out ache at the back of your throat. Trust me, that is not a good feeling. While testing out my recipe I thought I would add more cayenne to the hot chocolate to make sure it had a Mexican flair. The result was not pleasant and I got a thumbs down from the family. Of course, everyone has their own idea of what tastes good. I would suggest that if you follow my recipe but you want heat add it to your own individual cup.

Don’t forget the orange zest! The orange flavor mixed with the chocolate and cinnamon sticks is absolutely delicious. While the cayenne tingles the back of the throat, the orange zest flavor will linger on your tongue. Top the whole thing off with marshmallows and what more could you ask for on a cozy night.

In a large pot whisk together milks, sugars, cayenne, chocolate liqueur, zest and vanilla over medium low heat. Simmer for 10 minutes. Add chopped chocolate and whisk until melted. Add cinnamon sticks and continue simmering for 10 minutes until nice and hot. Strain into mugs and top with marshmallows if desired.